My Interview with Mountain Warrior MMA 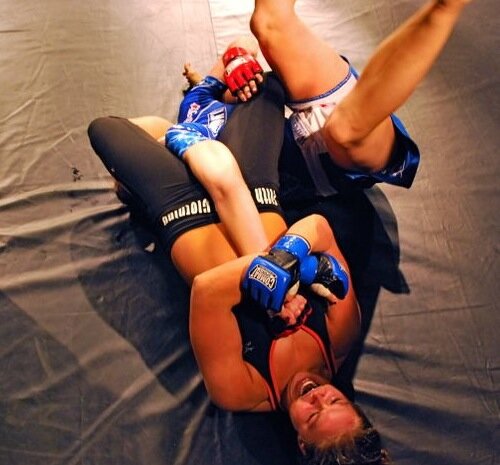 Ronda Rousey was kind enough to take time out to speak with Mountain Warrior MMA (MWMMA) after her big win last weekend at Hard Knocks 12 where she defeated kickboxer Charmaine Tweet. The victory was Ronda’s second win as a pro and has created lots of speculation that she will soon be headed to Strikeforce.

MWMMA: You just had a big win over Charmaine Tweet where you showed you had the answer to someone who had a reputation as a striker. Did you prepare any differently for that fight?

Ronda: Yeah. We did a lot of…not so much striking, but lots of footwork… standing outside of striking range…not being too far or too close…trying to frustrate her. It seemed to work pretty well.

MWMMA: So you keep winning fights with the armbar. Do you specifically go for arms or is it just that it was what was available at the time?

Ronda: You know what? I go out there and I’m constantly improvising, so it’s usually the first thing that I see… going for armbars…it’s what I was used to doing as I was growing up. It’s the most ingrained thing in me so I usually see it first. It’s not that I’m intentionally going in there and saying “I’m gonna get an armbar.” I walk in and I intend to win with what ever way is available first. It looks like it’s a pattern now, I guess.

MWMMA: And I guess being into Judo, armbars are kinda what you do.

Ronda: Well, when I was doing Judo, my Mom was a very big influence on me…and one of the things she always said was, “You can’t expect anyone else to win the match for you or you can’t expect the referee to call a choke or a pin but if you break their arm, then it (the referee) doesn’t matter. You only go in to win, so the referee doesn’t matter.” So she always trained me to go for armbars first since it’s the most definite way to win.

MWMMA: Are you still with Glendale Fighting Club and Team Hayastan?

Ronda: Yep, and I do my conditioning at Results with Leo Frincu who is also my wrestling coach at SK Golden Boys…and I teach a class at Dynamix MMA. Henry Akins helps with everything JiuJitsu and Antoni Hardonk also helps with my striking.

MWMMA: Do you have women fighters to train with at your gym?

Ronda: No, I train entirely with men. I don’t have any women to train with. I once trained with a girl and after the first exchange she told me I hit too hard and she didn’t want to go with me any more.

MWMMA: MMA is the fastest growing sport yet it seems Women’s MMA is lagging behind the sport as a whole. Would you say WMMA is still in it’s infancy?

Ronda: I would say men’s MMA had a head start…and when Gina Carano stopped competing, they didn’t have a face to put to WMMA that will sell. I think what they really need is another trademark player that they can market. I’m trying my best to be that person.

MWMMA: So being the “Face of Women’s MMA” is something that appeals to you?

Ronda: Well…it’s something I think will make me a lot of money (laughs). I don’t know how much I’ll appreciate all the extra attention… but career wise, it’s what I’m planning for.

MWMMA: Since you defeated Charmaine in such an impressive manner, do you think that win might have put you in a better bargaining position with, say Strikeforce?

Ronda: Well… actually they (Strikeforce) were calling us that night asking if we already fought, and how did it go…so they are very interested in keeping updated with how things are going. We are talking to them right now…I was told to…well I don’t want to say anything right now without anything being signed…but they are very interested and we’ve been talking to them.

MWMMA: In any case, it appears that ultimately you’ll end up in Strikeforce where Cyborg is the champ. How soon do you think you’d be ready to take on that challenge?

Ronda: I would like to have 5 or 6 fights. When I got started, I didn’t think it would be so hard to find matches as it has been, so I’m kinda behind what I was hoping to be at this point. But as soon as I get signed by Strikeforce, it will be much easier to get matches from there on out. I’d say within 5 or 6 matches I’ll be looking for a title shot.

MWMMA: Are there any names you’d like to fight next?

Ronda: Well…we have somebody in mind for the next one, but I don’t really want to say anything before we can commit…I mean…I don’t believe it until the contracts are signed. I think eventually in my career I’d like to fight of course Gina Carano…Amanda Nunes…I’d like to fight Cyborg of course…but those are just some ideas…I’ll fight pretty much anybody they put in front of me.

MWMMA: Without mentioning names, it there a certain style of fighter you’d like to fight? Another striker? Wrestler?

Ronda: You know, so far I haven’t preferred any one style. The girls I’ve fought so far have been from very different backgrounds. My goal is to be as well rounded as possible. I don’t want to have to pick and choose and go through this whole process to find the perfect opponent. I just want to feel open to and safe fighting against any style.

MWMMA: Are you able to train full time?

Ronda: Yeah, I just quit my job yesterday. I still teach a class at Dynamix but thats only for one hour twice a week.

MWMMA: According to Wikipedia, you train with Team Hayastan fighters such as Manny Gamburyan, Karen Darabedyan, Sako Chivitchian and Sevak Magakian. Is there anyone you train with that has a name like Bob Smith?

Ronda: No, there’s not. I kind of stick out like the ‘sore thumb extraordinaire” there. I’ve just known all these guys since I was a little kid and my Mom used to train with their coach…When I got started in MMA, I wanted to go with someone I could trust…I’ve known Gokor (Chivichyan) since I was little and I just went up to him and told him that I wanted to do this and whoever he recommended that I go with and train with that I will just believe him. It’s worked out pretty well so far…and yes, pretty much everyone I train with has a last name that ends in “yan”.

MWMMA: Your last fight was at 145, is that your preferred fighting weight?

Ronda: I can’t go any lower than 145. That’s the lowest weight I can healthily make. I might consider taking a catchweight fight at 140 some day, but not unless I was very persuaded.

MWMMA: Anyone you’d like to thank for getting you this far in your career?

Ronda: Yeah, all the coaches I mentioned earlier. I’d like to thank Gene Lebell who helps me out a lot. My manager Darin Harvey and of course my Mom.

Thanks again to Ronda for taking time out to answer our questions.