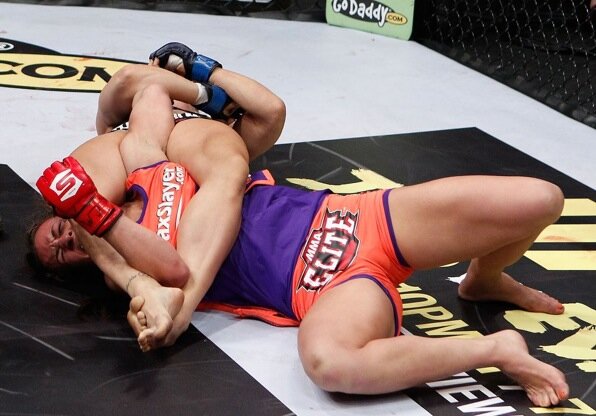 Tate’s arm was bent at an abnormal angle before she finally tapped at four minutes 27 seconds of the first round.

“She’s good, she’s legit but I don’t feel that bad about it,” Rousey said of the nasty submission win.

Rousey, a former Olympic judo bronze medallist who has won all five of her fights in the first round via armbar, is expected to take on former champion Sarah Kaufman of Victoria next.

Tate came out swinging but Rousey tripped her early. Rousey seemed to have locked in the armbar but Tate somehow escaped.

Tate pulled Rousey down and looked to take her back. Rousey scrambled free and got back to her feet.

After a brief exchange on the feet, Rousey used a judo hip toss to take the champion down. Rousey moved into mount, transitioning to an armbar. Tate tried to resist but Rousey got the submission hold and started cranking the arm.

It bent and bent before Tate finally tapped.

“It’s a little sore,” Tate said later of the arm.

Strikeforce had made the most of the looks of Tate (12-3) and Rousey (5-0), bidding to add some glam to the women’s side of the sport.