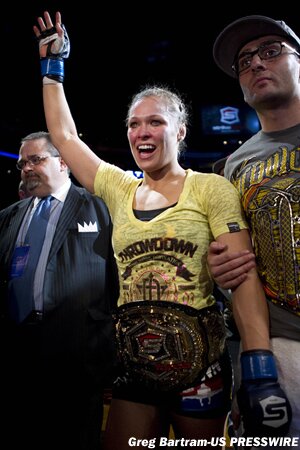 by Steven Marrocco from MMAJunkie:

COLUMBUS, Ohio – Newly minted Strikeforce women’s bantamweight champion Ronda Rousey may or may not have expected a reaction when she claimed that she could not only beat Miesha Tate, but Tate’s boyfriend, Brian Caraway too.

But when Caraway fired back on Twitter and wrote that women couldn’t compete with men and, regrettably, promising physical violence to Rousey in a mock confrontation, Rousey couldn’t help but smile.

Neither could her mother and friend as they watched Caraway and Tate attempt to explain his statements and attack Rousey in subsequent messages.

“[Caraway] and Miesha were up all night tweeting and trying to defend themselves, and it was all over the front page of MMA.tv, and me and my friend and my mom were just sitting there laughing that they’re stressed out and tweeting all night, and we’re like, eating trail mix and watching ‘The Fifth Element,’” Rousey (5-0 MMA, 3-0 SF) said following her title-winning performance against Tate (12-3 MMA, 5-2 SF) at a Strikeforce event bearing their names.

It might have been icing on the cake for Rousey, who was ready to reconcile with Tate before the champ headbutted her at the weigh-ins for the event, which took place Saturday at Nationwide Arena in Columbus, Ohio, and aired on Showtime.

Rousey said she “didn’t feel that bad” about dislocating Tate’s elbow and torquing it in awkward directions before Tate finally submitted late in the first round.

At the post-event press conference, the new champ said she was impressed by Tate’s fortitude, but she showed no more regret for her actions than she did afterward in the cage. She also said the referee shouldn’t be blamed for not stopping the fight even as it seemed clear as day that Rousey had damaged Tate’s arm.

“She’s a tough chick,” Rousey said of the former champ. “That hurts. I’ve had my elbow dislocated before, and that’s no fun. But the rule is in judo that even if it’s dislocated, and they don’t tap, you’ve got to keep going. I don’t think the referee should be criticized for not stopping it because those are the rules I’m used to.”

Rousey welcomed her next likely challenge, that of former champ Sarah Kaufman, who defeated Alexis Davis on the event’s preliminary card. There was none of the animosity between them that characterized the buildup to Saturday’s event.

Kaufman likely won’t take that bait. But if she does, it might be all the better for Rousey.

“People have to realize about Twitter, it’s not just chatter,” she said. “You’re constantly releasing written statements that even if you delete it right away, it’s out there.

“So people (such as Caraway) have to think a little bit more before they say something sexist like that. Because I was like, ‘Dude, you ever heard of (tennis player) Billy Jean King?’ I mean, who says that? That’s my comment. Tweet it.”