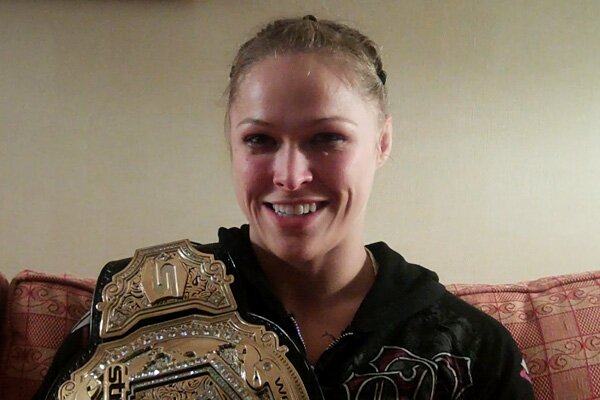 Ronda Rousey will put her newly christened UFC bantamweight title on the line against Liz Carmouche at UFC 157, promotion president Dana White announced Thursday. It will be the first women’s bout in the history of the Las Vegas-based organization.

At Thursday’s UFC on Fox 5 news conference, White officially introduced Rousey as the promotion’s inaugural women’s bantamweight champion. After he presented her with the belt, White revealed that Rousey would defend her crown against Carmouche in the UFC 157 headliner.

UFC 157 takes place at the Honda Center in Anaheim, Calif. The organization’s confirmation of the contest comes after it was mistakenly announced that Rousey would face Cristiane “Cyborg” Santos at the Feb. 23 event. Santos quickly shot down the booking, however, stating that while her team had been negotiating with the UFC, she would be unable to make the cut down to 135 pounds in time for a February meeting with Rousey.

Nevertheless, “Cyborg” did reveal that if given more time to make her weight cut that she might be able to trim down to bantamweight in order to challenge for Rousey’s title, contradicting previous reports asserting that such a cut could cause health complications for the former Strikeforce featherweight champion.

While White stated that the Rousey-Santos contest was his first choice for the UFC 157 headliner, he also revealed that Carmouche was the most willing alternative opponent for the champion.

“[Rousey-Santos] was obviously the fight we wanted to make. We wanted to do that at 135 pounds, and we worked hard to make that fight. I believe that this fight will happen. I truly believe the next one will be the Cyborg fight at 135 pounds,” said White. “Let me put it to you this way: [Carmouche is] who wanted to fight [Rousey]. People aren’t kicking the doors down of Zuffa to fight her.”

A 2008 Olympic judo bronze medalist, Rousey has made her name in MMA by hyperextending elbows seemingly at will, submitting each of her first six opponents in the first round with her patented straight armbar. The 25-year-old captured the Strikeforce bantamweight crown from Miesha Tate this past March and defended it successfully in August, stopping former titlist Sarah Kaufman in just 54 seconds.

“[The Santos fight] is going to happen eventually. I can’t make these girls fight me when I want them to fight me,” said Rousey. “I’ve got a lot of respect for Liz. She’s the only one that stepped up and said she wanted this fight right now. It speaks a lot to her. When the other girls actually want to come to the big show, they know where I’m at.

“I didn’t know about this until this morning. I don’t even know what to make of it. It means a lot, and I feel like we have a lot to prove at this event. No one is going to be disappointed. I think the women are here to stay and we’re gonna prove it.”

Carmouche, 28, began her pro career in 2010, rattling off five straight wins before earning a shot at then-Strikeforce bantamweight queen Marloes Coenen. Though “Girl-Rilla” gave the champion all she could handle, the experienced Coenen pulled out a fourth-round submission win to retain her belt. A decision loss to Sarah Kaufman would follow for Carmouche, who then rebounded with a pair of wins in her last two outings under the Invicta FC banner, finishing Ashleigh Curry and Kaitlin Young in April and July, respectively.

Filed Under: Blog, News
No Comments »