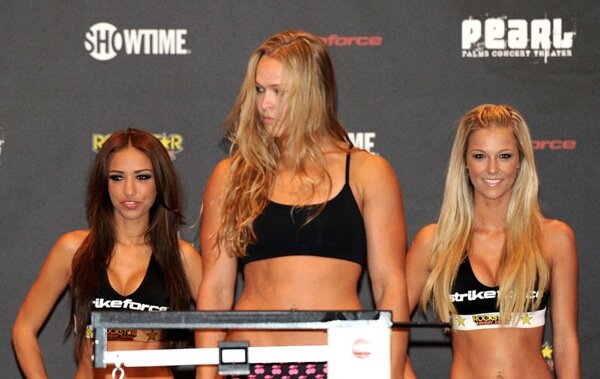 Ronda Rousey vs. Julia Budd Scheduled for Strikeforce 20 on November 18, 2011 at The Palms

Strikeforce officials today announced the bout will take place at an as-yet-unannounced November event, but company brass stopped short of announcing an official date or location for the card.

A fitness model and personal trainer with a Muay Thai background, as well, Budd fights for the fourth time under the Strikeforce banner. “The Jewell made her debut in October 2010 with a TKO victory over Shana Olsen. Budd then suffered a setback with a 14-second knockout loss to Amanda Nunes this past January before bouncing back with a decision win over Germaine de Randamie.

Meanwhile, Rousey looks for her second Strikeforce win. The 24-year-old former Olympian debuted earlier this month with a controversial submission win over Sarah D’Alelio, who insisted she did not verbally tap, as referee Steve Mazzagatti contended. Rousey has six total MMA bouts as an amateur and pro, and all six ended via armbar in less than one minute.